I’m Still Here: Black Dignity in a World Made for Whiteness by Austin Channing Brown 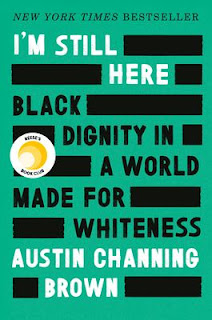 First off, I have to say that I am totally unqualified to write a review of this book. One of the essential things that (I think) I understand about the conversations being had about racial injustices in the current state of the world is that white people have a tendency to try to make it all about themselves, even as they think they are socially progressive and an advocate for racial equality. I do not know what it is like to walk in the shoes of any person of color. I will never know how it feels to walk/run/drive/shop/______ while black. I am not trying to insert myself into that existence.

All I can say is I am here to listen.

At age seven, Austin Channing Brown was already accustomed to having people think that she had a boy’s name. She describes an experience at the local library where the librarian questioned, “Is this your card?” a little more pointedly than she might have asked someone else, someone white. This incident caused her to ask once again why her parents had named her Austin. It was her grandmother’s maiden name, but also Austin’s parents had considered that by giving their tiny dark-skinned newborn that name, that one day she might have the advantage of not being pre-judged. Her mother said, “As we said it aloud, we loved it. We knew that anyone who saw it before meeting you would assume you are a white man. One day you will have to apply for jobs. We just wanted to make sure you could make it to the interview.”

Austin speaks about her time working for a large, majority-white Christian non-profit organization where well-meaning as co-workers may have thought they were, they didn’t fully comprehend the insensitivity of their comments, their scrutiny of her behavior, their criticism masked in concern. From being asked (repeatedly) on her way to her own office if she needed help finding the outreach center, to being confused with another black woman from another department, her frustrations tumble out in her writing as she explains how these sort of things happen all the time, based solely on her physical appearance.

One of many other things that strikes me in this book, as I try to read and understand and simply listen, is that Austin also talks about the expectation of absolution as (again, well-meaning) white people want to tell her their stories of racial experiences. White guilt may be instigated by memories of not standing up for a person of color, or at laughing at a racist joke twenty years in the past, or by whatever thoughts have been stirred up by white people just starting to confront their inherent white privilege. Those are not things to confess to a black person for the sole purpose of making the white person feel better about themselves. Hearing those confessions is exhausting, says Austin, just one more piece of emotional labor that is loaded upon her on regular basis.

One simple thing we can do in these increasingly socially aware times is listen to each other. Even calling these times more socially aware may be something of a fallacy as our country is divided on so many issues. I highly recommend this beautifully written memoir to any reader as part of a journey to better understanding each other.