Monsters and Mythical Creatures from Around the World by Heather Frigiola 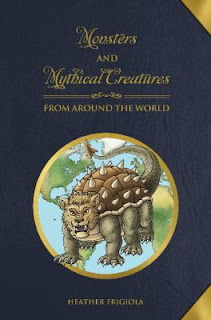 I picked this book up with the intention of just glancing through it but became intrigued. Frigiola starts from various cultural areas instead of individual countries, and briefly explores some of the creatures from those areas.  Greek and Roman myths occupy their own chapter because of the strong influence these have had on Western civilization, but they didn’t dominate the book.

While in most cases the author looked at ancient legends, a few creatures of more modern vintage did show up, such as the Mothman, Jersey Devil, and the jackalope.  Entries tend to have some history, a description and variations, and sometimes a brief retelling of a story about the creature.  I especially liked that Frigiola noted how some descriptions changed after conditions in the area changed, whether from conquest or migration.

Some creatures are not at all well known outside of their homeland while others have international reputations.  There are also comparisons between creatures who have superficial similarities:  the Russian Firebird is compared to the legends about the phoenix ; the Yeti, Yowie, and Sasquatch are contrasted as are the Egyptian and Greek versions of the Sphinx.  I had heard of the Australian bunyip but not the yara-ma-yha-who which draws blood out of its victims by way of suckers on its fingertips and toes.  Parents advise children to play dead if attacked as the creature loses interest if it believes the victim is dead.

The entries are certainly not comprehensive and don’t pretend to be.  They’re short essays designed to whet the appetite and to give the reader some idea of the amazing variety of the world’s mythical beasts and beings.  There are several I want to follow up on.

I also like that the author doesn’t present each entry as if this is the last word.  For example, under Latin America’s “Were-jaguar,” it’s explained that the term is used by archaeologists and researchers who aren’t really sure what it meant in the culture.  It could have been an object of worship or an ancestral totem; it could represent a cryptid or a shapeshifter.  The text also makes clear that shapeshifting can mean something different than a typical Western European interpretation.

The illustrations are simple but effective.  I would have enjoyed seeing more artistic interpretations (or in some cases photos of native artwork) but given the sometimes greatly divergent descriptions of some of the creatures a full representation would have taken up several volumes.

A simple index ups the value and maps make clear which geographic area is being referenced.

I think this is a nifty little book and was certainly worth my time.

Email ThisBlogThis!Share to TwitterShare to FacebookShare to Pinterest
Labels: creatures, Cryptids, Frigiola, Jeanne, monsters, Monsters and Mythical Creatures from Around the World, myths