Like Christy, I am something of a newcomer to audio books. While I have to say that I still prefer REAL books (i.e., paper!) I have listened to and enjoyed several lately. My taste in audio runs more to non-fiction and to things I have read before so that if I mentally tune out at times (because I think it is a good thing to pay attention while driving) I still know what is going on.  Here are some of my favorites, in no particular order: 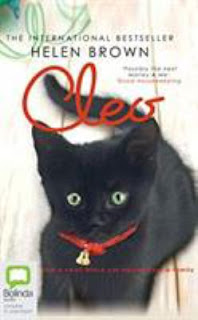 Cleo by Helen Brown:  I have loved this book for years and given many copies to friends. When I learned that an audio version read by the author was available, I had to give it a listen.  Brown lost her beloved older son to a traffic accident. This is the story of how she grieved and then learned to love and live again.  It’s thoughtful, heartfelt, funny, honest, and most of all beautifully written.  Unlike some authors who read their own works, Brown does an excellent job: her voice is warm and expressive, giving a sense of intimacy.  Her New Zealand accent adds to the charm.  She enunciates so well, there’s no problem understanding her.  (I admit when I watch some British shows I feel I need to turn on the captions until I get used to the accent. Not a problem here.) 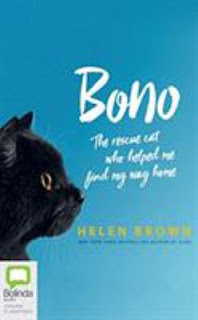 Bono by Helen Brown: Yes, I really like Brown’s work and hope there will be audios of all her books eventually.  In this one, Helen is feeling a bit restless and wonders if she can create a new, glamorous life in New York.  She approaches her publisher who, much to her surprise, loves the idea of a Big Apple visit. She can promote her books and—as part of the promotion—foster a special needs cat named Bono.  Who, Brown finds, is not inclined to be cooperative about being fostered.  This time the book was read by a professional actress who did a good job, though I confess it took me a bit to get over my disappointment that it wasn’t Helen (after reading her books and listening to audio, I feel we are on a first name basis.) 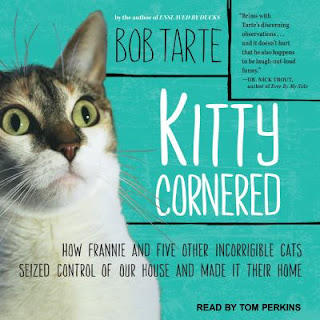 Kitty Cornered by Bob Tarte describes life with a menagerie of ducks, geese, parrots, bunnies, and cats. You know which part caught my attention.  Again, this is a book I have read, gifted, and read again.  This audio is narrated by a professional who does a good job but he doesn’t sound like the Bob I hear in my head so it took awhile for me to get into it.  I wanted to “coach” him into sounding the way I thought he should sound.  Other people who haven’t read the book and formed an opinion shouldn’t have this problem. The feline cast are all scene stealers: sweet Moonbeam (better known as Moobie) who learns to use her Elizabethan collar to her advantage; needy Maynard; free spirit Frannie; grouchy Agnes; pretty Tina; and Lucy the snapping crocodile disguised as a dilute tabby. 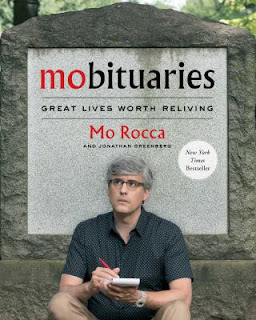 Mobituaries by Mo Rocca is a browser’s delight but also fun on audio.  For the uninitiated, Rocca likes to take topics and people he feels have not been appropriately appreciated and tells his audience about them.  It’s a fascinating and delightful look at subjects from Sammy Davis Jr., Prussia, Audrey Hepburn, disco, and much more.

Calypso by David Sedaris:  I had heard Sedaris on NPR so I was already familiar with his delivery and his humor.  I found myself alternately cringing and laughing as I listened to this.  I had read a previous book so I knew a bit about the family dynamics.  I’m not sure his humor is for everyone but I do enjoy his writing.  He does know how to turn a phrase. 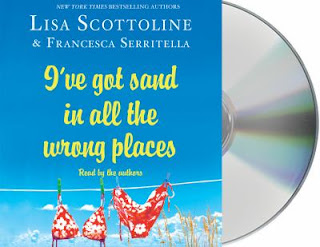 Finally, the audio books that started it all, courtesy of a Book Bingo requirement:  the mother/daughter duo of Lisa Scottoline and Francesca Serritella reading their essays about, well, whatever catches their fancy.  With enticing titles such as I’ve Got Sand in All the Wrong Places and I Need a Lifeguard Everywhere but the Beach, I was easily drawn into the lives of these two women.  Most entries are humorous, but serious topics are covered as well. 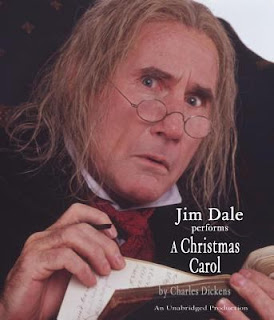 Next up:  I'm listening to Jim Dale read A Christmas Carol.  ‘Tis the season! And though it's a story I've read and seen many times, there are bits I don't remember such as the discussion about "dead as a doornail." I'm not finished but I think I can highly recommend this one as well!