The Lady Takes the Case: A Manor House Cat Mystery by Eliza Casey 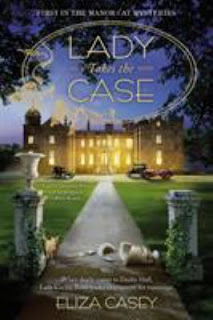 England, 1912.  The aristocratic Bates family is facing financial hardship as their efforts to maintain the family manor requires much more money than they have at hand, leaving them with few choices:  sell family heirlooms, part with their land—or marry the son of the family off to a filthy rich American heiress whose money will pay the bills in return for a title and a country house.  Guess which option they choose.

After a bit of a fright when it seems the American cash cow—er, heiress—has gone down with her ship, the lady in question shows up on the doorstep with a maid and bemoaning the loss of her luggage.  Patrick, the heir, is trotted out and put through his paces though the dear boy would much rather be tucked up with his test tubes and botanical experiments.  Clarabelle, I mean Annabel, is loud, somewhat lacking in social graces, and only grudgingly impressed with Danby Hall—having the bath down the hall is terribly inconvenient.

Witness to all this is Lady Cecilia Bates, the daughter of the house and devoted sister to Patrick.  She desperately wants to save the family home but is also concerned that her sensitive, bookish brother find true love.  Cecilia is a bit of an outsider herself, given to boisterous play at times and chaffing under the strictures of class and the time period.  She is an open, affectionate child of 19 who quickly bonds with the exotic working class maid, Jane, Annabel has brought with her.  Jane has also fetched a cat she saved from the sinking ship and of course Lady Cecilia adores cats.

Things seem to be going along swimmingly until one of the guests downs a drink and expires from poison.  Annabel is certain the drink was intended for her, and much drama ensues which might reduce the chances of Danby Hall’s salvation, so Cecelia and Jane set out to investigate.

I had hoped to be enchanted by this book but I wasn’t.  I have the distinct impression that the author is an American who has watched a little too much Downton Abbey.  I’m an American who watched a little too much Upstairs, Downstairs, an earlier series which made the class distinctions of the time quite clear.  There is a feeling of egalitarianism which I find disconcerting, given the time period.

As the book went on, I had the distinct feeling that I was reading a bit of Downton Abbey fan fiction though with new characters.  The many names in common seemed to be a wink to the series --Bates, Hughes, Aunt Maggie, even a J. Fellows—and the cat who survives the sinking of ship is named Jack, which I took to be a nod toward the Titanic (DA fans will know that the sinking of that great liner sets up the conflict as the series opens.)   Feeling it might be more tongue in cheek than I first realized helped some, but not enough.

Since this is also a first in series, the opening chapters seemed very slow as characters and relationships were established. The plot was done well enough but the characters dragged it down for me.  Your mileage may vary.
Posted by BPL Ref at 10:06 AM