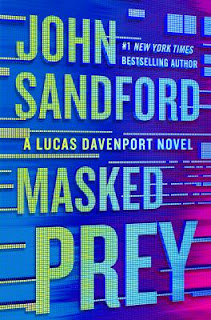 We are delighted to present another review from Kevin Tipple, author and avid reader.  He maintains a review and information blog which is primarily concerned with the mystery, thriller, and crime fiction. Check it out at Kevin's Corner.

It has been a few months since U.S. Marshall Lucas Davenport was shot. September is half gone and he knows he still doesn’t look right no matter what the others say. Working out helps, but he isn’t back physically or emotionally, and he knows it. He also can’t spend much time worrying about where he is at as he has new case to work. He lives for the hunt. That freedom to hunt bad folks come with a cost when folks pull strings to get you a job. In this case, that cost is the occasional political task.

The latest installment payment has come due and that means that Lucas Davenport has to go to Washington to quietly meet with Senators Elmer Henderson and Porter Smalls. In a surprise to Lucas and no one else, Jane Chase of the FBI is also present for the meeting. They come to Lucas for his ability to hunt as well as his discretion as the daughter of Senator Roberta Coil of Georgia has a problem.

Audrey Coil found some of her pictures as well as pictures of other kids of elected officials on a hidden website billed as “1919.” The nineteen appears to be related to the nineteenth letter of the alphabet, the letter S. In other words, the site name is code for SS. Based on what is on the site, it appears to be a Neo-Nazi type group issuing a subtle call to action and using the pictures of kids as suggested targets. Nothing overt that clearly is a threat though one could look at the site and come to that conclusion. The FBI has been able to determine the site is hosted out of Sweden which has strict privacy laws making finding out anything about those involved impossible. Everything is well hidden, including the website address and the people behind it, which means they cannot be identified and questioned.

Senator Smalls and Porter are acting on behalf of a number of the parents of the kids who have pictures on the site and want something done about it. The simple solution of removing the site from the internet would create a new problem as those behind it could put it up again and do a way better job of hiding it. They got lucky with finding it in the first place because Audrey Coil has an internet presence, and advertiser base, and her and her boyfriend stumbled across it. The parents want Lucas to dig and see if he can find a crime so that the FBI can do something more than what they have done so far. At this point, there is no real crime that could be prosecuted as taking pictures of others in public and posting them on the internet is not a crime. They want Lucas to dig quietly so that the media does not get wind of it and start broadcasting the investigation news day and night.

Chase of the FBI gives Lucas everything they have so far and wants Lucas to keep her updated as she really wants his help. Lucas is also to keep Director Mallard advised of what he is doing and update Smalls and Porter as necessary as well as give them deniability should things go bad from a political perspective.

Things start escalating very fast after Lucas does a few interviews, starting with Audrey Coil, and reads a lot of files. The situation is complicated and messy and keeping things quiet soon becomes impossible in Masked Prey: A Lucas Davenport Novel by John Sandford.

Then the shooting and killing really starts.

This latest in the series is a fast moving thriller style read with lots of moving parts. Some may object to the fact that politics from both sides of the aisle is sprinkled throughout the read with the author pointing out various issues from time to time regarding extremism on the right as well as the left. Considering the subject matter, it would be impossible to leave the politics out of it. Despite what you may read in some criticism, the author does a very good job of balancing both sides of various issues while not overriding the main story of the hunt. Mr. Sandford still has the touch thirty books later in this series and Masked Prey: A Lucas Davenport Novel is a mighty good read.

While I have been on the hold at the library for months now, Scott put me on hold for the eBook format and made things work so that I could get it now when it came up through the Dallas Public Library System.