The King of Crows by Libba Bray 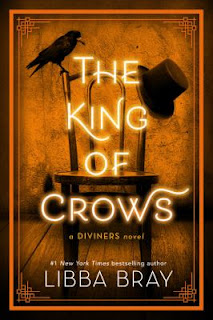 The King of Crows is the fourth and final book in the Diviner series by Libba Bray. Set in the 1920s, it wraps up the story of a group of Diviners who all have unique powers thanks to a government-backed experiment their mothers participated in while expecting. Throughout the series, these young adults face various challenges but everything is connected to the mysterious man in the stovepipe hat, the King of Crows. And now the final battle is upon them.
Endings are hard and while this one isn’t perfect, it’s a solid way to conclude the series. The King of Crows opens with the Diviners trying to find their way to Nebraska to meet a girl one of them has seen in his visions – a girl who can possibly help them. Circumstances out of their control lead them to split up, and they must make their way separately from New York City to the Nebraska farm. I was very excited at this development because I have a soft spot for road trips in fiction, and I also had no idea what was going to happen. So by circus, traveling band, and just plain hitchhiking, the Diviners make their way.
I didn’t love everything about this book. The climax didn’t 100 percent work for me; it felt a little anti-climactic and not wholly earned. Also, one problem every book in this series has is sometimes it’s just too quippy for its own good. It’s fairly normal to break up the tension after a dramatic scene with a funny line, but the Diviners series does this during tense scenes, and it does it often. I loved the other audio books so much that I decided to listen to The King of Crows as opposed to physically reading it, and because of that, the quip problem became especially obvious. Stopping a scene dead in its tracks to crack a joke deflates any bit of tension. I don’t know why Bray or her editor didn’t realize this.
However, despite this, the entire series is well worth a read. Bray’s writing is beautiful and touching. She often takes little detours to highlight an unknown, average American and their experience in the United States. This may seem counterproductive to a well-paced story but it works, and they were some of my favorite parts. Bray started this series almost 10 years ago, and it takes place almost 90 years ago. Though she couldn’t predict the turbulent times our nation would be going through, her story of 1920s America still resonates today.
Posted by BPL Ref at 10:17 AM