Reviewed by Kevin Tipple
Welcome back guest reviewer Kevin Tipple! His blog, Kevin's Corner, is an award-winning source of reviews and news.  Here is his latest review for us: 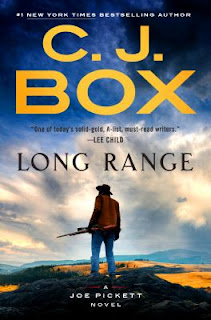 Humans and there ever advancing technology have always had an impact on the West. Often in unintended ways with major consequences. One of those who has noted those changes have been Author C. J. Box. He has done so in a variety of series, especially those that feature Wyoming Game Warden Joe Pickett. The same is true in his 21st book in this long running and evolving series, Long Range: A Joe Pickett Novel.

As the book begins, Pickett is astride a borrowed horse and in the Teton Wilderness instead of his beloved Saddlestring District. One of three game wardens that make up the newly formed “Predator Attack Team” they are on the hunt for a grizzly bear that has killed a local hunting guide. That is if one can believe the out of state hunter, Julius Talbot. The story he tells is bizarre and does not describe typical bear behavior. Going with the client and sole witness back to the site of the attack, will allow the Game Wardens to recover what is left of the body and verify the story.

That is the plan until the Director of The Wyoming Game and Fish Department calls on a satellite phone and orders Joe Pickett to board the arriving helicopter and get back to his district immediately. The legendary and notorious Judge Hewitt is enraged and calling in markers and favors. Someone took a shot at him, missed, and hit his wife, Sue Hewitt. She is now in the local hospital in critical condition. Judge Hewitt has demanded that all local law enforcement assemble for a meeting in his chambers. He is enraged, justifiably so, and wants to get all local law enforcement working the case his way.

At the same time, Nate Romanowski is also about to be an enraged husband as well. He has been trying to live on the grid and follow all the rules after finally having numerous federal charges dropped. That past of his, working in and out of the shadows, is something that will again he used against him in the here and now.

The latest in the long running series, Long Range: A Joe Pickett Novel picks up a few months after Wolf Pack. The events of that book play a significant role in this read. As has always been the case in this series, people age, relationships change, and for the Picketts, family is the center of everything. The marital dynamic between Joe and his wife, Marybeth, remains the heart and sole of this series that should be read in order.

Simply put, Long Range: A Joe Picket Novel by C. J. Box is very good and well worth your time.

My hardback large print reading copy came from the Kleberg-Rylie Branch of the Dallas Public Library System by way of the “Library to Go” curbside delivery at the Lochwood Library. Appreciate your libraries and librarians as they are all that stands between us and the twin demons of ignorance and hate.