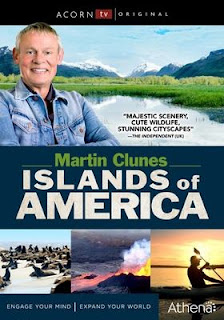 I enjoy a number of British TV series including Doc Martin, about an irascible physician with an aversion to blood and a dreadful bedside manner. (And yes, the library owns the series on DVD!) I was intrigued to see that the actor who plays the titular doctor has done some travelogues so I put in a request for “Martin Clunes:  Islands of America.”

There are four episodes in the series, starting with Hawaii’s islands and then moving on to Alaska, just to get in the extremes.  Clunes is an exuberant guide, determined to enjoy himself if at all possible.  He gets a bit more than he bargained for in Hawaii, as Kilauea was still erupting about that time. He also visits the islands off the coast of Washington state, California, New Jersey and the island of Puerto Rico, among others.

I confess I skipped ahead and started with the episode where he meets some Gullah people who live on the lowlands and islands of Georgia and South Carolina. Then it’s on to North Carolina to Roanoke Island and the long-running outdoor drama about the Lost Colony.  He talks with cast members and gives the audience some background about the mystery (the primary audience is British, after all).  Next he and the crew go to Virginia and to the annual pony swim at Chincoteague.  It’s obvious Clunes is a real animal lover, especially of horses.  His excitement and enthusiasm is palpable.

I had thought I might just watch the one episode, do a quick review, and call it quits.  But Clunes was having such a good time I ended up watching all four.  Other stops include the island of Manhattan where Clunes goes up in the Empire State Building despite his fear of heights.  I could identify.  But he gamely made his way around, white-knuckling the guard rail and trying to be pleased that he was outside in an area not usually open to tourists. He was perhaps most excited on a visit to Avery Island, Louisiana where the McIllhenny family has made their world famous tabasco sauce for over five generations.  Clunes is a fan of the sauce, and he was interested in every aspect of the production.

In short, I was happily entertained and even learned a few things.  One is not to taste the tabasco mash, but another is to look for other travelogues with Martin Clunes.
Posted by BPL Ref at 12:40 PM