Fever Year: The Killer Flu of 1918 by Don Brown 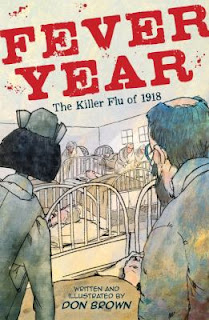 I like the way Book Bingo expands my reading.  This year I had another “read a graphic novel” square so I was looking around for something to fit when I saw Fever Year on our catalog.  Given the current coronavirus outbreak, it seemed more than timely.

The book begins on New Year’s Day, 1918.  World War I is raging and the U.S. has men in training camps around the country, preparing to send them to Europe.  In a town near one of those camps, a doctor has encountered a strange illness that seems to target the young and vigorous rather than the elderly.  Despite this, Dr. Miner suspects this new illness is some sort of influenza. The outbreak in the town seems to disappear, but then a young man at the training camp falls ill.

Thus begins one of the greatest pandemics the world has ever seen.  Brown explains the origin of the name (ex influential colesti, referring to the belief that the disease came from the heavens) and notes some possible outbreaks dating back to ancient times.  He then charts other outbreaks—one that started in Russia in 1899 that killed a million people—before detailing the epidemic that changed the world.

I found a wealth of information in this book, from the reason for the name “Spanish flu” to famous people who survived it (Walt Disney, Franklin Roosevelt, Gandhi) to the various theories on how to combat the disease to the present day ethical questions about recreating the disease to study it.  While the format doesn’t allow an in-depth examination, it does provide a sound foundation for anyone interested in learning more.  A bibliography is provided.

The illustrations are quite well done, mostly tans and browns suggesting the sepia of old photographs.  The sketches are evocative and sometimes moving.

Brown is also the author of similar non-fiction books, including titles on the Dust Bowl and Hurricane Katrina.
Posted by BPL Ref at 9:30 AM