The Memoirs of Josephine Fish by Josephine and Patricia Fish 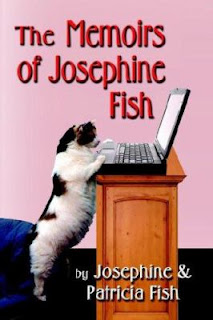 Josephine Fish, a most superior calico cat who lives with an assortment of male cats (mostly stupid ones, in her opinion), a dog, and two humans, one male and one female.  Josephine whiles away her time staring out windows at the birds.  One day, she concentrates hard on a bird and—surprise!—she can understand what the bird is thinking.  Her human female likes the chickadees, so Josephine begins to query them as to what they think about the humans.  She soon branches out to other animals, such as squirrels and chipmunks.

This activity brings another visitor, Mr. blue jay (sic) to visit Josephine.  Since she has been able to communicate with the chickadees, Josephine is now a feline of interest to some mysterious animal leaders who want her to use her prowess with the computer to send emails to politicians to further legislation to benefit animals. The leaders have information about certain people—the President, members of Congress—and will use it to get what they want. Will it work?  Or will Josephine get her humans in deep, deep trouble?

I found this book while doing some shelf-reading and was quite taken with the cover.  The copyright being 2005, I wondered if it were so thoroughly outdated as to be discard material so I decided to read it to find out.  The verdict is “sort of.” The President in question is one President “Hinton” and the mysterious leaders know that he is having rendezvous with a woman who is not Mrs. Hinton, which is the leverage they have with him.  There are references to a “Bob Bowl” who is also running for president, but is “too old,” according to one of the humans.  There are a couple of Senators who have some shady business deals who also are sent emails. This part of the book almost seemed quaint.

However, I did enjoy Josephine’s description of the various animals’ thoughts as well as her interactions with the other cats and with Gloria the dog.  There are some interesting observations as well as good information, delightfully presented.

The book would have benefitted from a proofreader in spots.  There seems to be a changing number of male cats in the household for one thing; for another, the elegant and sophisticated Josephine starts referring to herself as “flea-bitten” and “mangy” for no apparent reason. Some of the typewritten quirks I can ignore—the book is supposed to have been written by Josephine herself—but others just seem “off.”

Overall, this is a fun book, a tad dated, but not as much as I expected.  Josephine is one clever girl and very observant.  The tongue in cheek humor can still evoke a smile even if readers may not recall some of the political landscape of the era.
Posted by BPL Ref at 10:13 AM