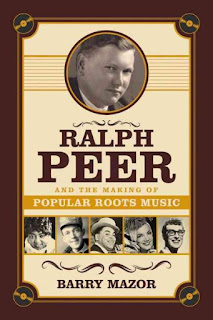 Mention the name “Ralph Peer” and probably the first thing you’ll hear is “the Bristol Sessions”—at least here in Bristol, anyway.  Peer’s visit in 1927 when he recorded both the Carter Family and Jimmie Rodgers is the stuff of legend, and we have the museum to prove it.

But Peer’s influence over popular music, and indeed the music industry as a whole, looms much larger than one recording session.  Even before the 1927 visit, he had been recording both “hillbilly” and “race” records (the latter referring to recordings by African American artists, music that would later be classified as blues or jazz) across the country. The Bristol trip just happened to be a sort of musical perfect storm, in which two future stellar performers would record on portable equipment that produced a much truer, richer sound than before.

For those who aren’t fans of early roots music, the first parts of the book can be slow going.  Peer recorded some who are household names—Louis Armstrong, Jelly Roll Morton—but many of the names were unknown to me (Clarence Williams, Johnny Dodds, Papa Celestin) so I admit I got a bit bogged down at times.

There is also a great deal of information about how the music business, especially music publishing, evolved.  Peer pioneered a fee schedule for his artists and seems to have been one of the few who treated them fairly.  He forged personal relationships with them, as did his wives. The music business as we know it today would be very different without Ralph Peer.

While the early part of the book focuses on the business side, the reader does get a peek at Peer’s personal life as well.  He married young, to a girl from his Missouri hometown; but after a stint in the Navy during World War I he found he wanted to travel the world.  He and Sadie divorced amicably, and Ralph married his second wife, Anita.  She was a vital part of his business and made her own favorable impression on the people with whom Ralph worked.  She was especially good friends with the Carter Family, so much so that Maybelle named a daughter for her.  Peer’s third wife was Monique, an Englishwoman of Danish extraction who spoke English, French, German, and Spanish. She too became a business partner as well as a spouse and helped Ralph achieve his international music publisher status.

Most surprising to me was Peer’s role in introducing Latin music to the world.  He was one of the first to realize that the music could have global appeal and he set about signing as many artists as he could.  The Peers’ connection to the sound opened doors for them—literally—in Egypt, where a dubious chief of police was won over when he discovered the couple counted Carmen Miranda among their friends.

Learning about Ralph the man was a bit more difficult. While ambitious, he was content to keep a low profile.  He appreciated talent, hiring the best people regardless of race or gender.  He was an avid camellia gardener, tracking down varieties all over the world, and received international recognition for his efforts.

I have to give author Barry Mazon kudos for his exhaustive research.  I also applaud his restraint in not indulging in speculation about situations or conversations as some are wont to do.  I felt that if he couldn’t document it, he didn’t put it in the book.

This was the selection for the November meeting of the RadioBristol Book Club.  The audio for book club sessions is usually available for two months online. This particular book discussion was followed by an interview with the author.

The book for December will be Serena by Ron Rash. Tune in on December 19, 2019 to hear the discussion!
Posted by BPL Ref at 9:24 AM