An Incantation of Cats: A Witch Cats of Cambridge Mystery by Clea Simon 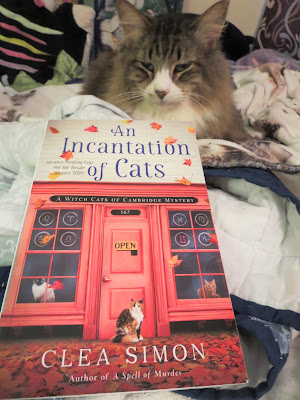 Becca Colwin is slowly adjusting to her new chosen profession as a witch detective—that is, someone who investigates mysteries that have a connection to her witch community. The trouble is that business is very slow and she needs to earn some money sooner rather than later so she is hopeful when a young woman turns up with a problem:  she thinks someone is trying to use magic against her.  Becca promises to find out what she can, hoping that her nascent powers are up to the task. Becca has been diligently studying the Craft, but her spells just haven’t produced much in the way of results, except for the thrilling time that she somehow managed to conjure up a pillow. Problem is, she’s not sure how or even why she produced the pillow. She’s been waiting for another real breakthrough, but it seems to be very slow in coming.

Fortunately, unknown to Becca, help is at hand in the form of her three sister cats: chubby orange Harriet, always on the lookout for treats and comfort; critical Siamese Laurel who thinks Becca needs a boyfriend; and plump little calico Clara, who adores her person and tries to look out for her, despite the lack of encouragement from her sisters.  The three felines come from a long line of witches’ cats and have powers of their own—in fact, it wasn’t Becca who conjured the pillow but Harriet. Becca is young and can be rather naïve, so Clara is worried that her beloved human may be getting herself in too deep, especially when a person connected with the case turns up dead.

This is the second in the Witch Cats of Cambridge series, but you don’t have to have read the first one in order to enjoy this one.  Most of the story is told from Clara’s point of view as she determinedly follows along on Becca’s investigations, hoping to keep the young woman out of trouble—something Laurel would probably characterize as the blind leading the blind.  There’s also an intriguing subplot about Becca’s heritage which may hold part of the key to her relationship with her cats.

Becca is very new to the investigation business but what she lacks in experience she makes up with determination.  She quickly realizes that the hardest part is figuring out who she can trust and that truth is not as easy to come by as it should be.

While the mystery was well done, it was the cats I loved—but then I am often more impressed by characters than plot in whatever I read.  There’s an interesting dynamic among the three whiskered sisters, all of whom have strong and distinct personalities. Sweet Clara is especially appealing because of her spunk and devotion.  Laurel and Harriet are more interested in their own comforts and pleasures, and tend to pick on Clara. Cat servants will certainly recognize the wiles employed to get Becca to do as her cats please, and may suspect their own felines of having some supernatural powers.

Becca, while oblivious to the machinations of her cats, is becoming a bit more secure and self-assured in her own life.  She is struggling to make ends meet, but she is certain that she’s found her calling.  I like the way that she is taking control of her own life, and not dependent on the approval of others.  She is currently single (a state Laurel wants to change) and while she’s open to a relationship, she doesn’t define herself by it. I find this refreshing in a cozy series.  I like a bit of romance, don’t get me wrong; but I weary of heroines who whine and pine over a guy.

The ending was extremely satisfactory, leaving me wanting more. (It’s not a cliff-hanger, per se; more an opening up to possibilities.)  I am quite intrigued by the introduction of one particular character who may have a larger role to play in the series.  I do hope Ms. Simon has another story available soon.

The first book in the series is A Spell of Murder.  You can read the review here.

Note:  I received an Advanced Reader's Copy of the book as a gift, with no expectation of a review, favorable or otherwise.
Posted by BPL Ref at 8:36 AM