The Path Was Steep: A Memoir of Appalachian Coal Camps During the Great Depression by Suzanne Pickett 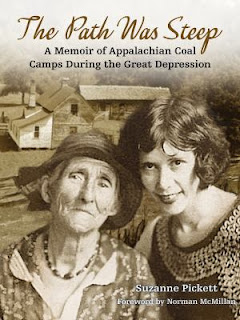 One side of my family is deeply rooted in the coal towns of eastern Kentucky. Even though my grandparents and great-grandparents left their familiar hills and hollows for the larger cities of Cincinnati and Marion, Ohio, I still grew up hearing some of the tales of how different, and often how difficult, life was in Appalachia. One thing that has stuck with me is my grandma saying that sure they (as children during the Depression) didn’t realize they were poor, because everyone around them was poor.

Suzanne Pickett’s book appealed to me because I wanted to read a firsthand account of living through the Depression in the kind of place my ancestors would have recognized. Born in Alabama in 1908, Pickett was intimately familiar with coal mining life as the daughter and wife of miners. Her husband David was an ambitious man who was always looking for a better job, whether it was near their families in Alabama or way up north in West Virginia. The family travelled back and forth in a 1926 Studebaker, quickly dubbed “Thunderbolt” as its engine operated at an ever increasing roar.

Two daughters, Sharon and Davene, rounded out Suzanne and David’s family. Amid all the homemaking, Suzanne managed to create a career for herself as a newspaper columnist. She wrote of nature, family, and faith. She was devoted to her extended family as well as homesick for her native Alabama and longed to visit as often as they could. Travel in the 1930s presented much more of a challenge before the advent of interstate highways. As I paged through the book, I was almost holding my breath as the family careened around mountainous curves in “Thunderbolt.”

Suzanne’s storytelling makes this Appalachian history comes to life. Reading this helped me to understand more about life, or I should probably say survival, during the Great Depression. The housing conditions, the transportation options, the scarcity and abundance of food in varying seasons—these are all things that my grandparents and great-grandparents would have experienced.

Suzanne must have had a natural knack for words, as she was not highly educated, but has told her story beautifully in this memoir. From love of family to striking coal miners, Suzanne writes vividly in this tale that portrays a unique place and time in our nation’s history.
Posted by BPL Ref at 9:00 AM