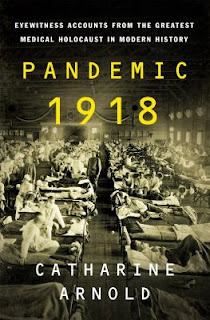 The Spanish flu. The flu epidemic that killed more people than died in World War I. A true pandemic. As the subtitle, shown above, declares, a medical holocaust. What were the contributing factors that led to this global epidemic? Where did it begin? Could it happen again? This book examines these questions and more.

The author begins by exploring the known history of influenza and the epidemics it has spawned. Catharine Arnold notes that mentions of what seems to have been flu date to ancient times, to Hippocrates in the Greece of 412 BCE. The word “influenza” appears to have originated with an Italian concern for the “influence of the stars” upon illness, around the year 1500. Incidents of flu epidemics, affecting peasants and nobility alike, occurred across the world repeatedly. None, however, has been found to equal the impact of the flu epidemic of 1918-1919. The author endeavors to address this impact upon individuals from various socio-economic strata, focusing upon the personal stories available. One set of the author’s grandparents succumbed to this flu. She chooses to use the term “Spanish Lady,” one often applied to this epidemic, perhaps because Spanish newspapers were not bound by wartime censorship rules and could discuss the disease.

The author proceeds through a discussion of what, in retrospect, were clearly early cases of the flu in 1917 European soldiers.  She them moves to a vast military encampment in France, peopled by English and French at that point, with a vast medical complex. One of the soldiers she highlights does not survive, developing the deadly bronchial or pneumonia-like complication of the flu. Another, a nurse, does not develop that complication and survives to write a memoir of her experiences.

She then moves to Haskell County, Kansas, where the flu, at one point, killed 3 of its 18 victims, sparking fear by striking the young and healthy. This death rate of 16.6% represents a surprisingly high rate in such a small rural community. The author reports traffic at the time between Haskell County and Fort Riley, Kansas, a military training camp with many young recruits. The young men unwittingly spread the disease.

The well-told and well-investigated tale continues its documentation of the spread of this disease. Viruses were unknown at the time. Influenza was believed to be bacterial. Army camps provided a perfect breeding ground for influenza, packing many young men into a confined space where they breathed air that was common to all of them, and in that and other ways, they shared their infections.

Among the interesting facts shared by the author is that flu epidemics often occur in at least two waves, with the second being more virulent than the first. At this point in modern life, we have no common point of reference. No one epidemic has killed so many around the world in recent memory. Computer models estimate that a “modern-day Spanish flu event would result in 188,000-337,00 deaths in the United States alone.” The scientific and medical communities want us to be prepared for the likely occurrence of such an event caused by this, or perhaps another, frequently mutating virus.

This book, though dense with fact, is also replete with stories of people from the time, including those of survivors and victims of the “Spanish Lady.” It is both readable and enjoyable. I was fascinated by the level of detail, whether anecdotal or scientific. Kudos to the author for an excellent job.
Posted by BPL Ref at 9:50 AM