What's Hot for May!

Here are the most requested books at the Bristol Public Library for the month of May, 2012!

15.  Guilty Wives by James Patterson and David Ellis continues Patterson’s run on our most requested author list.  This is a non-series book about a group of women who are given a luxury, nothing off limits vacation to do whatever they please.  It seems almost too good to be true—and of course it is.
14.  Wicked Business:  A Lizzy and Diesel Novel by Janet Evanovich is the sequel to Wicked Appetites. When a university professor is murdered, Lizzy and Diesel find themselves hot on the trail of the next magical stone, this one is supposedly infused with the power of lust.  Needless to say,  Diesel’s evil cousin Gerwulf Grimoire is also on the trail, but he may be tracking more than just the stone. This book will be published June 19.
13. Robert B. Parker’s Lullaby:  A Spenser Novel by Ace Adkins has earned a number of good reviews, which isn’t always the case when one author seeks to continue another’s work.  Adkins was praised not only for his characterizations but for keeping the rhythms of Parker’s writing.

7. Wild: From Lost to Found on the Pacific Crest Trail by Cheryl Strayed is the riveting and inspiring true story of a woman in crisis, due in no small part to a series of bad decisions on her part.  In an effort to straighten out her life, she embarked on a 2600 mile trek that crosses the Sierra Nevada and Cascade ranges.
6. The Last Boyfriend by Nora Roberts is the second in the “Inn BoonsBoro” trilogy which follows the life and loves of three brothers who set out to restore an old inn to its former glory.  Oh, and there’s a ghost!
5. Unnatural Acts by Stuart Woods is the latest Stone Barrington adventure which involves the wayward son of a hedge fund billionaire.
4. Stolen Prey by John Sandford has Lucas Davenport called in to investigate when an entire family is found brutally murdered.  This is the 22nd book in the series, and Sandford shows no signs of flagging.

3. The Shoemaker’s Wife by Adriana Trigiani is based on her grandparents’ courtship and is set in both Italy and New York.  Our director just finished reading it and he says it has a rich backdrop that includes the world of opera when Enrico Caruso reigned supreme.
2.  Fifty Shades of Grey by E. L. James is the one that started all the fuss!
And the number one reserve book is:
Deadlocked: A Southern Vampire Mystery, the penultimate Sookie Stackhouse book, if Charlaine Harris sticks to her plans.  It appears that she intends to, as she is wrapping up some storylines in this one. 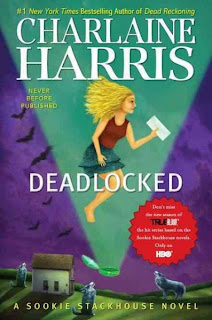