Read It Before You See It!

The film industry continues to pull movies from the printed page.  Some current choices are obvious, such as the “Twilight” or “Hunger Games” books.  Some are less so, such as the forthcoming “What to Expect When You Are Expecting,” the nonfiction guide for expectant mothers which is now a movie with Cameron Diaz, Jennifer Lopez, and Chris Rock. Some have been in the planning stages for years (Dear Robert Redford, when are you going to do the movie version of A Walk in the Woods?) and some really should have stayed there (fill in the title of a beloved book turned into unwatchable trash here.)
However, there are some recent films or upcoming films from books:

Nicholas Sparks books are often turned into film (“Message in a Bottle,” “The Notebook,” “Walk to Remember,” etc.) so it wasn’t a surprise to read that The Lucky One is now a film.  When a soldier finds a photo of a woman he doesn’t know, he begins to think it’s a lucky charm and sets out to find the woman in the picture.  Zac Efron stars as Sgt. Logan Thibault.

“Best Exotic Marigold Hotel” is based on These Foolish Things by Deborah Moggach, though the new reprint of the book will use the movie title.  The story has a group of British retirees deciding to go to India where the cost of living should be lower.  Entranced by advertisements for a newly remodeled grand hotel, they pack up and move—only to discover the place is not quite as advertised.  The film stars Judi Dench, Bill Nighy and Maggie Smith, so it should be fun to watch. 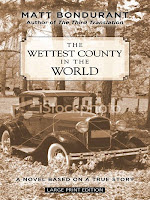 “Lawless,” the new movie starring Shia LaBeouf, Gary Oldman and Tom Hardy, is based on The Wettest County in the World by Matt Bondurant.  Writer Sherwood Anderson dubbed Franklin County, Virginia “the wettest county in the world” while writing about the Bondurant brothers’ exploits in the moonshine trade in a county where it was rumored that county officials were actually running the illegal trade.  Bondurant based his account on trial transcripts as well as family recollections and Sherwood Anderson’s writing.  Be aware that this isn’t a humorous, homespun tale, but a gritty and often violent story.
“Killing Them Softly” features Brad Pitt as a mob enforcer who is called to clean up a situation after a heist at a high stakes card-game. Ray Liotta and James Gandolfini also star in this adaptation of George V. Higgins’ book, Cogan’s Trade.

Perhaps one of the quirkier films may well be “Abraham Lincoln:  Vampire Hunter” which is based on the book of the same name by Seth Grahame-Smith.  This was Grahame-Smith’s follow-up book to his surprise success, Pride and Prejudice and Zombies.  I am not making this up.

P.S. I have mixed emotions about the last “book into film” I saw, which was The Woman in Black by Susan Hill. The movie, which starred Daniel Radcliffe, was well done and very atmospheric:  a genuinely creepy film in the best sense of the term.  The costumes and sets were incredible.  The plot was altered a bit, and, while I understood why they did it, I much prefer the book version.  The book's ending is the one that stays with me and the one which gave the book its power—well, that and some very descriptive writing.  I could almost hear the lonely clacking of the pony’s hooves over the causeway and feel the fog creeping in. (For the original review of the book, click here.)