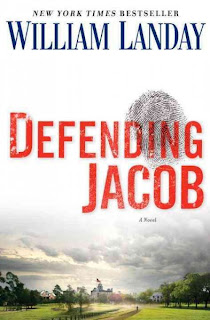 College sweethearts Andy and Laurie are living a quietly satisfying life in Newton, Massachusetts with their fourteen year old son, Jacob.  Andy is an Assistant District Attorney, so he’s one of the first called to the scene of the murder of a schoolboy.  While Andy first suspects a local pedophile, a fingerprint links the murder closer to home—to Jacob who, as it turns out, had been bullied by the victim.
While this book seems at first to be a standard courtroom thriller, albeit a well-written one, the characterizations, strong domestic drama, and the provocative questions raised take this novel to a higher level. At first, both Andy and Laurie are totally focused on proving Jacob’s innocence. Old secrets come to light,and strains their formerly idyllic marriage.  Laurie begins to doubt whether or not Jacob is actually innocent while Andy remains steadfastly convinced that he is not the killer. The uncertainty takes a physical and emotional toll on both parents, especially  Laurie who goes from a cheerful, loving wife to a shadow of her former self. Andy, desperately seeking to save his son, has to revisit some portions of his past.  The book tackles a number of difficult themes:  how far do you go for someone you love?  Can you ever really know someone?  How does society react to a person charged with a horrific crime, guilty or not? Is a propensity for violence genetically determined?
The court room scenes are expertly done and quite believable.  Landay is a former ADA himself, so he knows whereof he speaks.  Parts of the book are in trial transcript form, which is an interesting technique: flat testimony, stripped of emotional context, makes one re-evaluate a situation. It allows readers step outside the characters we think we know and view the situation as a stranger might.
The plot has enough twists and turns to satisfy mystery fans and enough substance to satisfy general readers.  This review was suggested by a member of the Nevermore Book Club, who thinks this is one of the best books she's read lately and highly recommends it to everyone.
Note:  This is actually Landay’s third novel, but is his most critically acclaimed.  Many seem to believe it will be his breakout book.  The book has been praised by writers as disparate as Lee Child and Nicholas Sparks, and has drawn comparisons to Grisham and Turlow.
Posted by BPL Ref at 9:16 AM