What Horses Say by Julie Dicker 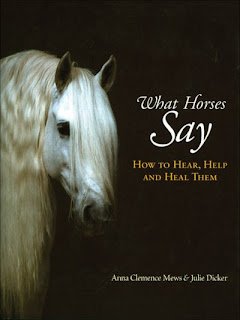 Reviewed by Nancy
It seemed like such a fantasy when I was a child, to be able to talk to the animals. Of course, now I talk to my animals all the time, but who knows what they really understand, and if they talk back to me I don't much get it.
But, it seems, there has been a real-life "Doctor Dolittle" amongst us. Her name was Julie Dicker and with her co-author, Anna Clemence, she wrote the book, "What Horses Say," which details her experiences as an animal healer and communicator.
Ms. Dicker, a resident of the UK who passed away in 2006, developed the ability to communicate with animals during early childhood. It wasn't as if she had learned to speak "horse" and then "cat" and then "bird" and then "dog." I tried this verbal method once myself, and found it to be impossible, especially the "cat." No, Julie Dicker was smarter than I am. She communicated with animals with her mind and her heart.
During the years that she worked as an animal communicator and healer Ms. Dicker built relationships with horse professionals who requested her assistance and insights regarding the behavior of their equine charges.
"What is wrong with my horse?" This is the question that drove many people to seek Ms. Dicker's assistance. According to Ms. Dicker, horses are smart, and have long memories. There is the story of Ozzie, who was a model steed as long as no one got near her wearing green boots. When green boots approached, Ozzie turned from a docile companionable friend into a raging lunatic of a horse, thrashing and churning and lashing out at anyone near.
Ms. Dicker had a session with Ozzie and learned that Ozzie had had some very bad experiences with people wearing green boots in the past. Once Ozzie's owners learned this they ditched their green boots and everything was fine.
This may sound silly to you, but there you have it. The horse was smart enough to connect green boots with bad experiences and also to retain this information for a long period of time.
Five years after learning this little quirk about Ozzie one of her owners forgot about the green boot phenomena one day. It was raining, and since it was raining he was wearing boots, and, uh-oh, they were cursed green boots. When he attempted to bring her in from the pasture she absolutely refused to be caught. He sloshed into the house, complaining to his wife that the usually cooperative Ozzie was determined to stay out in the rain. Once they realized he had on green boots, the wife, who was not wearing green boots, went to the pasture and caught the horse easily.
Then there's Lucy. Lucy was sold at auction, but chose another owner by reaching out of her stall and grabbing the clothes of Pippa, the woman passing by, who smelled good to her.  When Pippa looked at the horse's face and body she knew that she had to have her. She went and found the man who had bought the horse and made a deal with him. It turned out that Lucy had been terribly mistreated early in her life, but fully recovered after receiving healing from Julie.
One of my favorites of the tales related was about Dan. Dan was a bay gelding who had been with the same owner for five years. During this time he had been a great horse to ride, never spooking, and had gotten along quite well with his owner. Then suddenly the good times were over, and Dan was a nightmare to ride, scooting and spooking at every turn.
When Ms. Dicker arrived to give Dan healing he was very eager to tell her what was going on. It turned out his owner/rider had recently started riding with a friend and spent the ride conversing with her friend instead of paying attention to Dan. So Dan decided negative attention was better than no attention. He started spooking at bushes and plastic bags and jumping across the road at every opportunity. When he did this conversation stopped and his rider turned her attention to him. Once this was explained to Dan's owner, she cut the chatter and everything was fine.
I suppose there are two ways to view Ms. Dicker's work. Either it's amazing, or it's just another load of hooey. If you are a person who is very invested in the idea of the mystical, magical unseen world around us, I suppose you might fall into the "it's amazing" camp.
On the other hand, if you are one of those individuals who insists that they believe only in things that they can see and touch, only in things that appear to be concrete, this one might be a little too far "out there" for you. If ever there was a book that might pull a person from the "concrete" camp into the "mystical" camp this might be it. Maybe you should risk a look.
Posted by BPL Ref at 9:48 AM