Now You See Me by S. J. Bolton 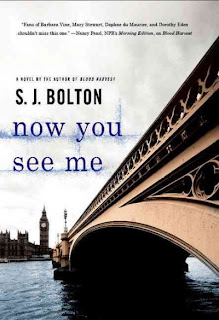 Reviewed by Jeanne
Policewoman Lacey Flint meets a dead woman standing by her car.  Technically, the woman is still alive but at the rate blood is spewing forth it’s obvious that her life span is now to be measured in seconds.  There’s no sign of the slayer; the women still wears expensive jewelry, though her purse is gone.  There’s no identification on her, no cell phone, no car keys.  As the police struggle to identify the victim, a reporter turns up with a letter that refers to Lacey and to the crime, using phrases that would sound alarm bells for any historical crime buff:
Saucy Jacky is back.
As a child, Lacey was fascinated by Jack the Ripper so she knows what the letter means.  She also realizes that the woman was murdered on the same day as the Ripper’s first known victim, and that the wounds are similar.  It soon becomes apparent that someone is replicating some of those crimes and the police are racing against time to prevent more murders. It’s also apparent that the killer is fixated on Lacey, who has some things in her past that she’d rather forget.
Bolton is a British thriller writer whose books tend to follow a certain follow a pattern, though they aren’t formulaic. Her novels usually feature a strong, gutsy female lead with a damaged past and a willingness to sometimes rush in where angels fear to tread if she feels someone is in danger.  There is a well developed supporting cast of characters.  Bolton also does a wonderful job with setting, describing places in vivid and tactile terms, and knows just what buttons to push to ratchet up the tension.  In her previous books, she kept the violence a bit removed by placing it in the past but in this book certain things are immediate and visceral—no pun intended.  She can take something ordinary and make it frightening.  For example, the song “My Favorite Things” runs all through the book; it was one of Lacey’s favorite songs, one she found comforting in difficult times.  I’m not sure I’ll ever be able to listen to that song again without feeling a sense of unease.
Another factor is always the past:  not just the characters’ pasts—which are important—but history and folklore always figure into the story in some fashion.  Legend is as apt to lead you down a wrong path as a right one; figuring out the important bits is part of the puzzle.  Bolton’s books are good illustrations of the Faulkner quotation that the past isn’t dead.  It isn’t even past.
Finally, Bolton’s solutions are complex and riveting; there are twists you don’t see coming.  That’s true of this book in particular. It makes it a little difficult to do a review in some ways, because to do it justice the reviewer would have to reveal some things best left for the reader to discover. She also doesn’t seem to believe in the pat happy ending; not all of her books end with folks walking off into the sunset together, holding hands.
I’m not a fan of graphic violence so some sections were definitely unsettling; but I can offer the same comment about many current thrillers and forensic books. (And, to be fair, there are other thrillers that are much more graphic.)  I did enjoy the characters and the plotting, the attention to detail and the bits of “Ripper-lore”—I can always count on Ms. Bolton to do her homework in such things!—and the ending was a shocker.
Posted by BPL Ref at 3:01 PM

Email ThisBlogThis!Share to TwitterShare to FacebookShare to Pinterest
Labels: Jack the Ripper, Now You See Me, S. J. Bolton