Koala of Death by Betty Webb 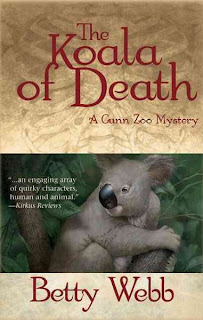 Reviewed by Jeanne
The second book in the delightful Gunn Zoo series opens with Theodora “Teddy” Bentley finding a body floating in the harbor near her boat, the Merilee.  The situation only gets worse when she realizes that she knows the dead woman:  it’s one of her fellow zoo keepers, Kate Nido, who does as TV segment as Koala Kate.  Kate had been attending a party on another boat the night before, so Teddy’s first assumption is that Kate had a bit too much to drink and fell overboard.  The coroner soon decrees that theory wrong:  Kate was strangled and died before she went into the water. As it turns out, Kate had a nose for gossip and could wield a mean keyboard with a blog filled with innuendo.  Now the list of suspects starts to add up, and there are a number of Teddy’s friends and coworkers on the list: Outback Bill, an Aussie zookeeper who was Kate’s boyfriend before someone dumped someone; Robin Chase, the big cat keeper who doesn’t like Teddy; Sam and Doris Grimaldi, the party’s hosts and zoo supporters who may have something to hide; Speaks With Spirits, a so-called “pet psychic;” and just maybe Cleo, Teddy’s mother.
Teddy, in addition to trying to solve the mystery, is called on to take over Koala Kate’s weekly liveTV segment featuring animals from the zoo and a TV anchorwoman with an apparent inability to follow instructions such as “Don’t touch the animals.”  Teddy’s boyfriend, Sheriff Joe Rejas, takes a very dim view of Teddy’s investigations, putting a little strain on the relationship.
Sometimes second books in a series disappoint.  The novelty has worn off: the exotic setting isn’t so exotic, the characters a bit less sparkling.  I’m very happy to report this is not the case here.  I enjoyed this outing just as much as the first.  Again we are introduced to the habits of several different fascinating creatures in a non-tutorial manner.  Koalas take center stage, as you might guess, and little Wanchu almost steals the show.  One other point I have to mention:  Teddy still goes back and visits Lucy the anteater, animal star of the first book.  I know that’s a minor point, but it’s a pet peeve—no pun intended—of mine, when a character meets a new person or animal, seems extremely fond of same, and next book has totally forgotten about that new BFF or else mentions same just in passing.  Teddy is loyal. I like that in a person.  She has several other fine traits too,including her love for animals and her job.  Webb doesn’t glamorize the zookeeper’s life:  overworked, underpaid, dealing with animals who could injure or kill at any time, cleaning up waste, and  sheer hard labor. It isn’t all cuddling koalas, folks.
I also like the relationship between Teddy and Joe.  While there is a bit of strain over criminal investigation, there isn’t that sense of manufactured drama some writers employ over and over in an artificial effort to create tension.
While I would classify these as “light mysteries” since there is not a great deal of Serious Social Commentary or Deep Psychological Analysis, I found them both entertaining and educational about animals. There are some really funny scenes in the book, but it isn’t silly or slapstick. The characters are well done; Webb avoids the easy stereotypes and manages to surprise us, just as people do in real life.
You don’t need to have read Anteater of Death to enjoy this one.   Me, I’m already looking forward to the next in the series, The Llama of Death.
Posted by BPL Ref at 10:19 AM