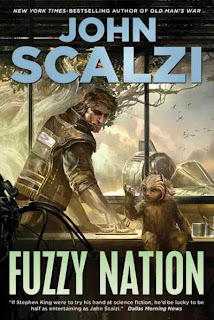 Reviewed by Jeanne
John Holloway is a space age prospector, working on the planet Zarathustra.  More specifically, he’s an independent contractor working more or less on his own for ZaraCorp, seeking out valuable mineral deposits to exploit. John’s one of those guys who just loves to push the envelope—and to push his boss’s buttons, so it’s probably just as well that he prefers to work alone.  Just as John is fired—again—he discovers an incredibly valuable seam of gems in a cliff he’s just destroyed by accident.  He’s immediately rehired and plans are being made to extract the gems.
Then John discovers something else.
Something alive. . .
Something furry and cute. . .
Something that might be a sentient being.
Something that could be a big problem, since ZaraCorp’s licenses specify they can work only on planets without sentient life forms.
As John becomes more and more convinced that the Fuzzies are indeed intelligent beings, ZaraCorp becomes more and more determined to preserve its claim, even if it means eradicating the Fuzzies.
If this plot sounds familiar, it may be that you have encountered the Fuzzies before. In 1962, H. Beam Piper published a book called Little Fuzzy which was the inspiration for this book by Scalzi, who took the story, updated it a bit and made some changes in characters and events.  He gives full credit to Piper for the inspiration.  Scalzi is a well known science fiction writer in his own right, and one of many who have loved the Fuzzy stories through the years.  Piper himself wrote two and part of a third before his death; other authors have picked up the Fuzzy tales through the years.
I had read those books as well as Piper’s and have enjoyed them all.  I also like Scalzi’s version.  His Holloway isn’t a grizzled prospector but a young man with a yen for a certain xenobiologist (who dumped him) and a somewhat checkered past which included a stint as a lawyer.  (The latter comes in very handy during one of the best courtroom scenes I’ve read outside of Perry Mason.) The Fuzzies are as enchanting as ever, and some of the questions the story raises are perhaps even timelier.  It’s a light, fun read (despite one terrible incident) that will have you laughing, crying and cheering.  Even if you don’t think you like science fiction, give Fuzzy Nation a try.  You might be pleasantly surprised.
Posted by BPL Ref at 7:14 PM