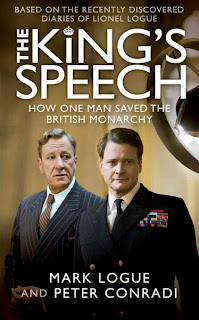 Reviewed by Jeanne
In January, 1936 King George V died.  His eldest son became King Edward VIII but his reign was short-lived:  he wanted to marry Wallis Simpson, a twice divorced American woman and he wanted her to be Queen, an unacceptable condition.   He was forced to abdicate the throne in favor of his younger brother who became George VI.
Such are the dry facts.  The lives behind the facts have made for riveting books and movies, for each has a dramatic story to tell.  For the most part, it’s been the story of David and Wallis, the Duke and Duchess of Windsor, which is either the tale of a Great Romance or a Great Betrayal, depending in part on who is telling the story.
Recently, however, the story has been about George VI, the man who never expected to be King.  Bertie, as the family called him, was afflicted with a stammer which made public appearances difficult to say the least.  It has been said that his wife consented to marry him in part because she felt with such a defect he would never be king.  Imbued with a strong sense of duty and knowing that the country would need a strong monarch in the face of war, he was determined to serve to the best of his ability.
The movie “The King’s Speech” (DVD KIN Main & Avoca) was thought to be a similar dark horse, since it didn’t feature car chases, explosions, aliens or semi-clothed people, but like Bertie it surprised everyone and became both a commercial and critical success.  The story revolves around Bertie’s struggles to overcome his speech impediment with the help of unconventional therapist Lionel Logue, an Australian with few academic credentials.   At its heart, “The King’s Speech” is about the relationship between the two men, king and commoner, doctor and patient; but it’s also about overcoming adversity and  about a nation under the threat of war.  The movie is inspiring without being preachy or saccharine.  I enjoyed it tremendously on many levels.  The cast was top-notch, from Colin Firth and Geoffrey Rush as George VI and Logue to Helena Bonham-Carter as Queen Elizabeth. The excellent supporting cast included Anthony Andrews, Derek Jacobi, Claire Bloom, Michael Gambon and two actors from “Pride and Prejudice”:  Jennifer Ehle and David Bamber. The whole look and feel of the movie reflected the historical period, especially the costumes.
As often happens when I see a “based on a true story” movie, I’m curious to find out how much is true and how much is artistic license.  Fortunately, the library has a good selection from which to choose.  For information about George VI and Logue, try The King’s Speech:  How One Man Saved the British Monarchy by Mark Logue and Peter Conradi (941.084 LOG Main).  The co-author is one of Logue’s grandsons who quotes from his grandfather’s journals and contemporary clippings, some of which were used in writing the movie’s script.
As for the Royals involved in the story, there are numerous books from which to choose.  King Edward VIII by Philip Ziegler (941.084 ZIE Main and Avoca) is an in-depth, sympathetic look at David’s life before and after he met Mrs. Simpson.  The Duchess of Windsor:  The Secret Life by celebrity biographer Charles Higham (941.084 Main and Avoca) is a juicy page turner while Michael Thornton’s Royal Feud:  The Dark Side of the Love Story of the Century (941.084 THO Main) examines the rift between the brothers and their wives.  The Reluctant King by Sarah Bradford (941.084 BRA Main) gives George VI his own sympathetic portrait, while The Queen Mother by William Shawcross (941.084 SHA Main) is the official biography of Queen Elizabeth, completed after her death in 2002.
Posted by BPL Ref at 11:29 AM