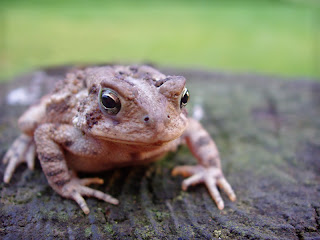 Reviewed by Nancy
If you enjoy words, word-play and good spelling in general, Wow! Have I got the book for you! "The Signal Mountain Spelling Book of JuliUn Tod" by Jud Barry (F BAR Main & Avoca)  is a book that's all about words. I don't just mean the words in the story that allow the story to unfold. I mean that this is a book that loves words, discusses words, our understanding of words and the way we use them, the impact of words on our lives, and of course, the spelling of words.
The narrator of this book is Juliun Tod, a pet frog who hates bad spelling. In fact, his name is the result of bad spelling:  the book’s main character, Casey, intended to name him “Julian Toad” but couldn't spell Julian or toad, so when he made a name-plate for Julian's terrarium Julian Toad turned into Juliun Tod.  Julian relates to us, not just the story of how he came to be Casey's pet, but also the story of how he became a frog in the first place.
Other characters included are Casey’s brother Dudley (appropriately nicknamed Dud); Solomon, a philosopher pig; Boudiccia, the evil cat; and Rowf, the dog.  Angel, a wild girl of uncertain origins, appears late in the story.
I was on pins and needles through the greater part of the book wondering if Juliun Tod was going to survive the evil machinations of Dud. There were many evil machinations, culminating with JuliUn taking a ride on a science fair rocket. This scared the doo-wah-diddy out of me, but turned out alright in the end.
This story is also a sort of fable in which the author offers his views on religion, the afterlife, and science fair projects, among other things.

As Mr. Barry asserts, "spelling matters." He assures us that after we die we must face what seems to be some sort of judgmental committee called the Iota Subscript Subcommittee of the Hereafter Admissions Review Committee (HARK). Yes, HARK, ha ha. This is immediately followed by a reference to herald angels singing, to help us grab hold of that joke, just in case we were snoozing when we read it and it slipped by us.

In this presentation, one faces the HARK committee after going through the "Winnowing" which seems to be the term for what happens when a soul separates from the body it has been traveling around in since it was born. Somewhere in the author's vision fits a place called "Mezzanine" which I believe loosely equates with Purgatory.

Correct spelling seems to prominently feature in our success or lack of success in the afterlife. As the book states, "In the beginning was the Word; in the end will be - the dictionary."
By the way, the author of this book, Jud Barry, is the Director of the fabulous Bristol Public Library. What a deal. He directs the library, and writes books to fill the shelves, too.
Posted by BPL Ref at 6:46 PM