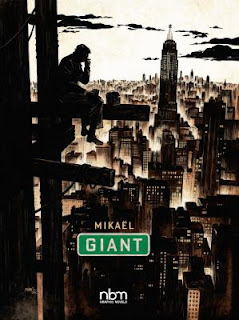 Set in 1930s New York, Giant is an impressive graphic novel about the workers (mostly immigrants) who were constructing the now iconic buildings of the city.  The story centers on “Giant,” a huge Irishman who speaks little but who harbors secrets.  One of them is that he failed to send Ryan Murphy’s death notification to Ryan’s family in Ireland.  Instead, he typed a note as Ryan and sent it along with some money.  Then he receives a reply. . . .

This was a new book which caught my eye when it came in.  I picked it up on a whim and found a much richer, deeper story than I had anticipated.  The action centers on what life was like at that time for a whole class of people.  Most are laborers who work hard and play hard in squalid conditions; they dream of those left behind while they re-invent themselves and sometimes try to leave their past far behind. It’s gritty, moving, sometimes violent, hopeful, and very human.

The art features sepia and olive tones, giving an historical feel while showing the emotional lives of the people. There’s the sweep of the city from the dizzying heights down to the tenements; bits of newspaper give the headlines of the day, while Walter Winchell’s commentary is in the background.  There’s a woman photographer trying to make a name for herself; a writer who can’t write who lets Giant use his typewriter; the new kid trying to learn the ropes; and Mary Murphy, Ryan’s wife who doesn’t yet know she’s a widow, sending news of the family and the Troubles.

Then there’s Giant.  Taciturn to a fault, he gives away nothing of his background. He’s a solitary man who doesn’t talk about his past or speculate on his future. Who is he?

In the brief foreword, it’s explained that part of the genesis of the book was an old photograph of several men sitting on a beam high above the city.  No one knows for sure who took the photo; except for two of the men, no one knows who the names of the rest much less what became of them.  This was the inspiration for the book, to give a life and story to some of those nameless people who created some of the landmarks we take for granted.

I recommend this to anyone who likes a bit of American history as seen through the eyes of the working
Posted by BPL Ref at 11:22 AM