The Book Charmer by Karen Hawkins 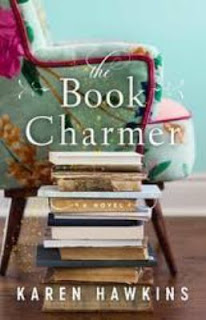 Grace Wheeler was a foster child, dragged from home to home with her younger sister, Hannah, until they found a home with Mama G. Eighteen years later, Grace leaves her high powered, good paying job to take Mama G. to the tiny town of Dove Pond, North Carolina in hopes that being in a familiar place will help the elderly woman battle dementia.  Also in tow is Daisy, Hannah’s daughter, an unhappy child who seems bent on making Grace’s life even more difficult than it is already.  The only job available is underpaid clerk’s position but Grace grits her teeth and takes it because it’s only for a year.  One year, and she’ll be back in the city and away from this little backwater community.

Not only is Dove Pond lacking amenities, it has some definite peculiarities, mostly in terms of its inhabitants.  The Mayor is too busy fishing to bother with running the town; the long-haired, tattooed, motorcycle riding neighbor is up at all hours of the night and is a source of fascination for Daisy; the local librarian claims books talk to her; and they all are emotionally invested in a town festival that has lost money for well over a decade.  Somehow they think Grace is going to fix it all, and they think that because one of the Dove sisters says so.

I picked this book up because the cover blurb said it was perfect for fans of Garden Spells, which is a book I adore.  (I love all of Sarah Addison Allen’s books, to be honest.)  The first chapter was a delight, but then the scene switched to new characters, and then it jumped ahead in time 18 years.  Of course, it took me nearly a week to get that far, due to interruptions and broken concentration.  I was beginning to think I’d just give up but I was only about 30 pages in and I knew I had to give it more of a chance than that.  It wasn’t the book’s fault we were in a pandemic, after all.

And boy, am I glad I did.  Just a few pages later, I found the book picked up considerably and was soon deeply involved in the lives of all these Dove Pondians.  The book is sweet, sincere, and romantic, with wisps of fantasy curling around and strong friendships abounding.  I was enchanted.

In retrospect, I see the “problem” was that this is a first in series book and the author was spending time setting us up for all that will follow.  (The next book is due out March 2021.) The premise is that the town, founded by the Dove family, hosts inhabitants who usually have some little extra gift, some bit of magic, that sets them apart.  Sarah Dove has books whispering to her, telling her who needs them; Ava Dove can use her herbs to make a personalized tea that is good for whatever ails a specific person.

This is a warm and delightful book which does indeed remind me very strongly of Sarah Addison Allen, and that is a Good Thing.  I’ll be recommending it to others as I wait for A Cup of Silver Linings.

By the way, the author bio say that she “grew up in the mountains of East Tennessee, where storytelling is a way of life.” She now lives in New England.
Posted by BPL Ref at 10:11 AM