The Trial of Lizzie Borden: A True Story by Cara Roberts 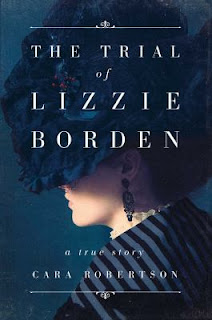 It was a hot day in Fall River, Massachusetts in 1892 when Adelaide Churchill looked across the way to see her neighbor standing behind her screen door. Concerned, she called out to her to find out if there was a problem.  “Oh, Mrs. Churchill, do come over,” replied Lizzie Borden.  “Someone has killed father.”

So begins one of the most infamous true crime cases in American history.  What is undisputed is that before noon on August 4, someone used an ax or hatchet to murder Andrew Borden.  His wife, Abby, already lay dead in an upstairs bedroom, killed in the same fashion at least an hour earlier.  No one had been seen entering or leaving the Borden home since Andrew arrived home for lunch; Bridget the maid had been outside washing windows, Lizzie said she was in the barn, and her sister Emma was staying with friends.

So who murdered the Bordens?

Robertson, who has a PhD in English as well as a degree in law, became interested in the case as a Harvard undergraduate.  As the title indicates, her primary interest is in the trial itself.  To say that it caused a stir is an understatement.  Reporters converged from all around, sending back sensational and/or sentimental accounts of the proceedings.  Lizzie’s every move was examined and commented on, as was her wardrobe, her posture, and her slightest expression.  Witnesses and attorneys received the same scrutiny, and the trial was treated almost as a sporting event, with testimony cheered or bemoaned, depending on which side the reporter championed—mostly the defense, apparently.

The book also examines the culture of the time, especially as regards to women.  A major argument was that surely a woman could not have committed so heinous a crime, and certainly not toward her own father.  (Abby, the stepmother, was a different matter in more ways than one. It was acknowledged that the two Borden daughters didn’t get along with their father’s second wife, but the trial focused on Andrew’s murder.  It seemed that in death as in life, Abby Borden was viewed as an afterthought.) Roberts also focuses on how evidence was admitted or excluded, and how the rules have changed in the interim, sometimes partly in response for how things were handled in the Borden trial.

The book is an even-handed, thorough treatment.  I admit I occasionally got bogged down in some of the testimony/rulings, but overall I found the book interesting.  I had read other titles about the murder, some of which offered ingenious solutions for the murders, but while Robertson is aware of the various and sundry theories she tends to stick to facts.  I could venture a guess as to who she thinks is responsible but she doesn’t state her opinions. I especially enjoyed the quotations from newspapers of the day.  I also liked Robertson’s insights about the Lizzie Borden story and how it was and indeed continues to be interpreted in popular culture in accordance with the views of the time. I think anyone interested in the crime would find this book to be an invaluable resource.

My one disappointment was that the aftermath of the trial was given short shrift.  True, Robertson entitled it The Trial of Lizzie Borden so I was forewarned, but her research was so meticulous that I dared hope she would have uncovered more.  Lizzie Borden lived out the rest of her life in Fall River, where she bought a grand house, renamed herself Lizbeth, and was the subject of much gossip.  Robertson does add one tantalizing tidbit: her lawyer’s old law firm still has a closed file on the case, unavailable for public scrutiny.  Does it have any answers? We may never know.
Posted by BPL Ref at 9:04 AM