The Fellowship of the Ring by JRR Tolkien 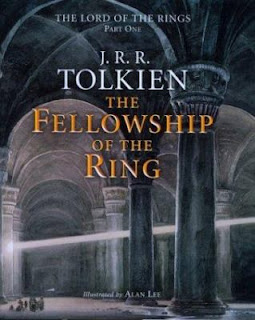 The One Ring—the ancient Ring of Power crafted by the Dark Lord, Sauron—is a powerful weapon in the wrong hands, or the right ones.  Imbued with incredible power, the Ring is dangerous and it can twist good intentions into evil acts.  For centuries, Sauron has waited in the depths of Mordor, biding his time until he can return reclaim the One Ring and return to his ancient throne and cover Middle-earth in darkness—forever.

Frodo Baggins, however, has no use for dark lords and rings and adventures.  He’s a hobbit who lives in the Shire, a collection of peaceful farm villages in the far north of Middle-earth, and spends his days in comfort within Bag End.  But when one of Bilbo’s old trinkets—a simple, unassuming gold ring—falls into his hands, Frodo and his halfling friends (Sam, Merry, and Pippin) are suddenly thrust into an adventure the likes of which no hobbit has ever seen.  Together, with the rest of the Fellowship, they will try to destroy One Ring and save Middle-earth.

Before I begin my review, I want to start with a full disclosure:  I love The Lord of the Rings.  I have read the trilogy four times, not including the times I’ve read The Hobbit, and I’m working on The Silmarillion.  I own all of the movies, sketchbooks from illustrators Alan Lee and John Howe, plus I’ve read some of the other associated works (like Children of Hurin).  The Lord of the Rings is near and dear to my heart, so, fair warning, I will happily talk about it for hours if allowed.

That said, I’ll try to keep my review succinct.

I first picked up The Fellowship of the Ring in middle school, after I watched the movie and promptly fell in love with it (and, admittedly, Aragorn).  More recently, I had the chance of rereading the novel as an adult and I’m glad to say it only gets better with time.  Tolkien’s writing is beautiful, a pure pleasure to read.  Although it’s very easy to get bogged down with the details—for instance, starting off with reading a treatise on the history of Hobbiton and learning all about the state of pipeweed within the Shire can be a little off-putting—I found it was easy to follow along once I settled into the natural flow of the story.

The Fellowship of the Ring sets the stage for the entire trilogy, which means there is a fair amount of history to sift through and a lot of characters to meet, but I found them to all be enchanting or endearing by turns.  For example, I love the ever-faithful Sam with his down-to-earth hobbit sense, and I enjoyed meeting the playful Tom Bombadil inside the Old Forest.  Honestly, I adored the entire Fellowship, even as they struggled to get along (dwarves and elves, as I have learned, are notorious for fighting).

More importantly, readers will find a lot of history and mythology in The Fellowship of the Ring.  Tolkien very obviously draws inspiration from known mythology, such as Norse and Greek and English folklore; however, he often incorporates these resources in subtle ways to create an incredibly detailed and intricate world full of competing histories, mythologies, folklores, and religions.  This first novel only gives us a glimpse into the enormity of Middle-earth.  Like the hobbits, readers are only just reaching out into the great wide world and learning more about Gondor, Rohan, Rivendell, Moria, and Mordor.

Overall, The Fellowship of the Ring is an extraordinary book.  It’s beautifully written, well crafted, exciting and endearing—and, well, it’s just plain wonderful.  I’ll be the first to admit, it can be a difficult novel to start.  With two more books to follow, plus a prequel and other “lost books,” it can seem rather daunting; however, once the Fellowship is gathered in Rivendell, the pace of the story picks up significantly and speeds along to a devastating climax.

It’s well worth reading, either for long-time fans of fantasy or newcomers to the genre.  In particular, it’s a great starting point for anyone just diving into Tolkien’s work or fantasy novels as a whole.  The Lord of the Rings has made an indelible mark on writing, and it’s always interesting to see the little threads of Tolkien’s influence within the writing of other authors, like George R.R. Martin, Christopher Paolini, or R.A. Salvatore.


Note:  In honor of National Library Week and the return of "Game of Thrones," we will be running Ambrea's reviews of Tolkien's trilogy plus a nonfiction book about Middle Earth this week, along with the Nevermore report. Return tomorrow for her review of The Two Towers.