Christmas: A Biography by Judith Flanders 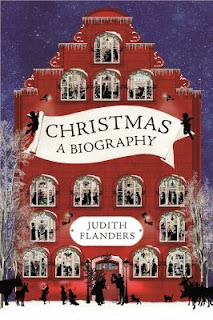 Christmas celebrations are entirely too secular, too given to merriment.  Sound familiar?  It should, as it’s a complaint that’s been made since at least the year 389—just thirty years after December 25 was designated as the Nativity.  A few centuries down the road, the complaint was that shops were closing on Christmas Day, drawing the ire of officials who did not consider the day to be a true Christian holiday because it was not mentioned in the Bible.  Penalties could be awarded to anyone caught even worshiping on “the superstitious time of the Nativity” as John Evelyn wrote in 1655 after a group of soldiers surrounded Evelyn and others who were gathered in prayer.

The fascinating history of Christmas and how it is observed is covered in Judith Flanders’ book Christmas: A Biography, a very readable and fascinating look at a beloved holiday.  My first surprise was finding that most of what we know about how Christmas was celebrated comes from prohibitions against doing things, such as drinking excessively or demanding food or money from householders.

Although the author is based in London, she has a good bit of information about how the holiday was observed (or not) in the United States as well as other countries, especially European states. She explains origins of customs, including the Macy’s parade, Santa Claus, and the singing of songs (and how the term “carol” came to be associated almost exclusively with Christmas).  She traces the evolution of so many aspects of the holiday that we take for granted: the exchange of gifts, wrapping of said gifts, Advent calendars, and the emphasis on family, especially children. My second surprise was how recently the emphasis on Christmas as a family oriented holiday became the norm; earlier it was considered a time for adults (mostly men) to go to a pub and drink.

The writer makes a strong case that two authors are primarily responsible for our modern views of Christmas:  Charles Dickens and Washington Irving.  Of course, almost everybody in the U.S. has seen, read, or heard some version of A Christmas Carol, but the influential Knickerbocker Stories are relatively obscure now.  Irving’s book features comic exaggeration which many of his contemporaries would have known to be “tall tales” but modern readers have taken at face value.

My one complaint is the lack of an index, which makes it difficult to refer back.  Otherwise, I can happily recommend this informative, entertaining book.
Posted by BPL Ref at 1:05 PM