The Disappeared by C.J. Box 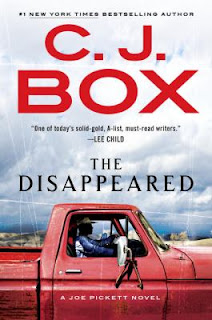 Joe Pickett is a Wyoming game warden, that is when he isn’t being fired, re-hired, or re-assigned by whichever governor happens to be in political power at the moment.  While Joe loves the wilderness environment in which he works, the human critters seem to cause much more trouble than the elk, bears, trout, and eagles.  Those truly wild creatures are just out to survive, whereas the people have much more complicated motives.  Joe has run into more than his share of murders in this long running series by C.J. Box.  From rodeo stars to off-the-grid hermits, someone is always trying to get ahead, get what they think should be theirs, or just get even.

Kate Shelford-Longden is a British businesswoman who came to the Silver Creek Ranch for a holiday.  Guests at the luxury resort are outnumbered by staff two to one, with every need anticipated and fulfilled.  Months earlier, Kate travelled to Wyoming, enjoyed herself thoroughly, then disappeared on her way back to the airport.  Now the British tabloids are obsessed with what happened to “Cowgirl Kate.”  Newly elected Governor Colton Allen doesn’t like the scandal and the potential damage to his state’s tourist trade, so he decides to send Joe in to investigate discreetly.

Joe heads south from Saddlestring to Saratoga in below zero temperatures.  He is tired of being manipulated by the powers-that-be, but he is happy to have a chance to see daughter Sheridan who is working at the Silver Creek Ranch.  Besides, an insider’s view never hurts when investigating a missing person case.  A recent college graduate, Sheridan is working as a wrangler at the resort before settling down to a “real” career.

Master falconer Nate Romanowski has a favor to ask his game warden friend.  Permits for trapping and hunting with eagles have suddenly gone scarce, as political winds blow this way and that.  Nate thinks that Joe might have a little bit of influence with state and federal officials, although Joe feels powerless within the wildlife agency that signs his paychecks.  Buffeted amidst the bureaucratic currents, both Nate and Joe seek answers to questions about their state’s natural resources.

I always enjoy the western stories woven by Box, but I can count on one hand the times that I have laughed out loud while reading this series.  As Joe, Sheridan and Nate find themselves deep within the current situation, the mental image created by the words: “What do you mean you shot him and then hit him with a fish?”—that line stayed with me through the remainder of the book.  Box usually throws in a game changing twist at least once before the conclusion of Joe’s adventure.

Well-developed characters shine as the action moves forward; plus, Joe’s wife Marybeth is a librarian and extremely efficient in navigating databases which might give Joe a clue or two.  (Always the way to my heart—include a savvy woman who knows her way around books and other library resources.)  Readers new to the series may want to begin with Open Season, published in 2001, and continue with a new volume every year through 2018.
Posted by BPL Ref at 12:51 PM