Dolled Up for Murder by Jane Cleland 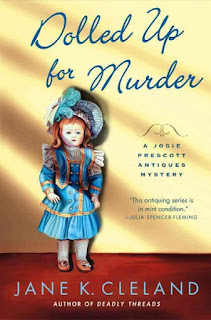 Reviewed by Jeanne
Do you watch “Antiques Road Show”? It’s sort of addictive, with people bringing up all sorts of odd items from bureaus to broadsides, and the expert explaining a little about the item’s history before offering an appraisal.  There’s enough information to interest and in some cases to whet the appetite, but never enough to bore before we’re shown some other amazing object.  Well, more than one reviewer has compared the Josie Prescott Antiques Mystery series to that program, and I’m going to be another one. Just throw in a murder or theft or two, interesting characters and a behind the scenes peek at how an auction house runs, and you have a pretty good idea of this series.
Josie Prescott runs her own antiques shop and auction house in New Hampshire. She’s just been given a collection of antique dolls to appraise for sale, part of an estate.  Alice Michaels, a local investment manager and doll collector, has stopped by to take a look at the dolls with an eye to purchasing some of them.  Alice seems quite cool and self-possessed, despite the fact she’s been accused of running a Ponzi scheme and may face legal action.  Moments later, Alice is shot to death in Josie’s parking lot.  At first, Josie assumes it must be the work of an upset investor, but then one of Josie’s employees is kidnapped. The ransom demand is a bit unusual:  the kidnapper wants the doll collection.
I’d read Consigned to Death, the first book in this series, and been impressed at the way the author handled the antique aspect of it: she manages to give the most salient points of information without bogging the reader down and makes it interesting. (Cleland owned a rare book store and antique shop for several years, so she knows whereof she writes.) The writing is clear and very readable. She also has the knack of making characters believable and moving the action along without having to resort to stall tactics to drag the story out.  The plot is well thought out: there are twists and turns along the way and a plausible enough solution.  It’s definitely a couple of notches above most themed mysteries (i.e., those that use a particular hobby or occupation to draw readers). Many of those seem to shoe-horn the quilting/cooking/dog grooming into the story while in this series the connection is a natural one. I would almost say they remind me of the Lovejoy mysteries by Jonathan Gash, except that Lovejoy was a bit too much of a cad for me to really love the books.  I’m not sure I would have read them at all, except that Ian McShane played Lovejoy in the TV series and he was much more of a loveable rogue than the written Lovejoy ever was.

One thing that Cleland does which I admire is that she plays fair with the reader.  She will drop in little tidbits that seem quite unimportant at the time but later form a whole picture.  She reminds me of Agatha Christie in that regard, because in many of Christie's mysteries seemingly idle chitchat would provide the key to the mystery.  I learned to pay attention to those bits of gossip about a sister who had gone abroad to Australia or a broken romance some 30 years before.  Cleland is as adept as Christie as working these hints in along with other little character points and pieces of information about antiques.
My biggest quibble is a physical one:  the print is small. I understand adjustable font size is another advantage of ebooks but I still like the old paper and ink versions. Imagine dinosaur noises here.
The Josie Prescott books don’t have to be read in order. I’m going to go back and pick up the ones in between and hope for larger print.

Update:  The next book I read, Deadly Threads, did have larger print.  This one involved vintage fashion, something of which I know little and that mainly from Barbara Michaels mysteries that sometimes used antique clothing or other fabric goods as a backdrop.  I enjoyed it-- and not just because it introduced a cat to the series.
Posted by BPL Ref at 11:04 AM