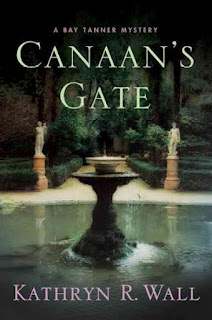 Reviewed by Doris
My first review for our blog was on Kathryn Wall’s Bay Tanner series.  Just to refresh your memory, Bay Tanner lives on Hilton Head, is gorgeous, smart, financially secure, and most likely to get into deep trouble. Her husband Rob was a special investigator for the SLED, South Carolina’s equivalent of the FBI. While investigating a drug cartel he is killed and Bay is gravely injured when their plane explodes. Once she recovers enough physically (it takes much longer for her to recover emotionally), Bay sets up an inquiry agency and embarks on a series of cases. Bay is back in Canaan’s Gate, the tenth book in the series. She is newly married, grieving for her dad, and up to her lovely neck in a case with fatal consequences.
Cecelia Dobbs, a teller at a local bank, hires Bay’s inquiry agency to investigate a possible embezzling scheme. A very wealthy, elderly couple seems to be in the hooks of an unscrupulous care giver who has free access to their bank accounts. The teller cannot prove anything for certain so she cannot go to bank officials, but she worries the couple may be in danger. Before Bay’s investigation has time to turn up anything, the elderly woman dies under suspicious circumstances and her grandson comes to Bay with the same questions as the young teller. Then the Cecelia Dobbs goes missing. The case proceeds and becomes a knot of hidden identities, missing money, murder, and a twist that will place Bay in way over her head, so to speak.
As usual with Bay, there are personal situations that complicate everything. Everything is being played out on a current of grief for her father whose recent death has left Bay feeling rudderless and uncertain about the future. Red, Bay’s new husband and former brother-in-law, is now working for her agency and chaffing a bit under the yoke of working for his wife.  Just before he died, Bay promised her dad she would marry Red, but all her instincts are telling her she does not love Red the way she should. She is also trying to deal with the advent of her emotionally disturbed half-sister into her life. Then, Red makes a sudden announcement that could change everything in their relationship. As the intensity of the personal situations increase, so does the danger in the case. To top it off, there is a hurricane bearing down on Hilton Head.
Wall’s rich descriptions of Hilton Head and the low country continue in this book. So does her excellent development of characters and the secondary characters here are strong and meaningful to the story. More than most females around whom a mystery series is written, Bay seems real: her insecurities and questions give her a vulnerability that is appealing. The plot builds tension as does the personal issues until you are flung into a resolution that will surprise you.
Canaan’s Gate is top quality. Wall just gets better with each new entry into the series.

(Note:  One more book in the series has been published, Jericho Cay.  Ms. Wall's beloved husband passed away in November 2011 and there has been no word as to whether the series will continue. Our sympathies go out to her.)
Posted by BPL Ref at 4:41 PM