Murder in an Irish Village by Carlene O’Connor 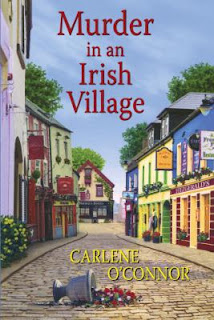 After their parents’ deaths, the O’Sullivan Six are struggling to keep the family bistro going. Twenty two year old Siobhan O’Sullivan had been headed to Trinity College in Dublin on a scholarship before Ma and Da were killed in a collision with a drunken Billy Murphy, who escaped serious injury but who did not escape a prison sentence.  Now she tries to keep her brother James from falling off the wagon as well as caring for the four youngest children. It helps that Kilbane is a small village, where everyone looks after everyone else—and sometimes take a little too much interest in things that aren’t their business.

One afternoon, Sibohan is shaken to see Niall Murphy, Billy’s brother, back in town.  She’s even more shaken when Niall tells her Billy is innocent and he wants her to give him ten thousand Euro for the proof.  Certain that he’s lying, Sibohan turns him down flat, hoping he will leave town again.

Instead he turns up in the bistro—dead.

I picked this up off the new shelf on a whim, bemused by the fact that we have another new book called Murder in an English Village (by Jessica Ellicott) and the fact that I’d just read two Ian Sansom books set in Northern Ireland.  The setting here is the Republic of Ireland, so there’s a lot of local color involved.  A handy glossary helps explain some of the terms and expressions and, thankfully, there’s a pronunciation guide to some of the names.  Strip it of the window dressing and at heart it’s a traditional village mystery, albeit in a distinctly modern setting with cell phones, scooters, video cameras, etc.  The charm comes both from the place and from the characters.  Siobhan is a feisty heroine, struggling to keep the younger children in line even as they test the boundaries.  She’s had to give up some of her dreams, or at least postpone them, and must watch as her friends go off to university and seemingly glamourous lives while she bakes bread and waits tables.

The village dynamics are also interesting and entertaining.  While they may fuss at each other, most of the villagers would close ranks against any outsider.  Gossip flies fast and furious, which both helps and hinders Siobhan in her investigations, made imperative because James is a suspect.

It’s a delightful light mystery, which will leave you longing for tea and brown bread.  I’ll pass on the scooter rides, however.