Charlie All Night by Jennifer Crusie 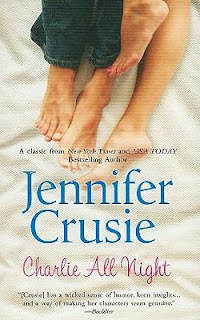 Allie McGuffey is a radio producer.  She’s the best in the business at WBBB, but when her boyfriend and WBBB’s prime-time radio DJ dumps her for a younger model, she’s furious—and, though she won’t say so aloud, heartbroken.  She decides she’s going to make a temporary DJ Charlie Tenniel into a star and, if there’s a little romance involved, she’s not going to say no.  Charlie, of course, has different ideas.  He’s not interested in becoming famous, even if he is interested in Allie.

When their fling starts blossoming into a full-blown relationship and Charlie starts getting some rave reviews in the community, both Charlie and Allie know things aren’t going quite like they planned.  And, as Allie gets her position back at the top radio producer at WBBB, she can’t help wondering what she’s going to do when Charlie’s time as temporary DJ is officially up?

I picked up Charlie All Night on a whim because I was interested in the story and I’d never read one of Jennifer Crusie’s books.  Two birds, one stone—right?  And I’m so glad I decided to read it, because I absolutely loved this book.

Charlie All Night is full of humor and heart.  Although I know Allie sets her eyes on Charlie for all the wrong reasons—and, on more than one occasion, I just know their romantic entanglement is going to blow up in their faces—I found their interactions both hilarious and heart-warming.  Allie and Charlie seem to get along well:  they fight and bicker like any couple, but they seem to harbor a genuine affection for one another.  They’re not afraid to laugh at one another’s failings or jokes, which I loved.

I liked how their relationship grew.  I mean, yeah, they sort of turn everything into a mess (if it isn’t Charlie accidentally publicizing their relationship over the air, then it’s Allie saying just the wrong thing to get her boss on her tail), but it’s just so funny how they manage to work together and, eventually, fall in love.

Personally, I enjoyed Charlie All Night and I had so much fun reading it.  I devoured it all in one evening, and I can’t wait to read more from Jennifer Crusie.

If I do have one complaint, it’s that I don’t really understand the secondary plot involved.  The real reason Charlie is visiting Allie’s town and posing as a temporary DJ at WBBB is because he’s secretly investigating the radio station and everyone in it; however, the plot line sort of gets pushed to the wayside.  Readers aren’t left hanging without a resolution, but it’s kind of secondary to Allie and Charlie’s relationship.  It doesn’t develop much, and I wasn’t very interested.
Posted by BPL Ref at 9:05 AM